Founded in 2011, the GPN has a vision - "pilgrims on all continents, and the pilgrim cities that receive them, becoming models of care for the environment and leaving a positive footprint on the earth." A need that has become ever more pressing as the Global Warming and Species Extinction have become more apparent.So what's behind the story?  It would be easy to blame the E.U.!  But the truth is the E.U. have been a force for good since they picked up the idea iand developed Green Pilgrimage Interreg Europe and the European Green Pilgrimage Network.The U.K. leaves the E.U. at the end of January 2021.  So, U.K. beneficiaries can wave goodbye to E.U. grants.  The friendships  forged through the European Green Pilgrimage Network will endure and we will continue to value our rediscoverd common history. Pilgrims from the U.K. will continue to walk the Camino de Santigo, visit Vadstena, Trondheim, Assisi and Rome; and European…
Post a comment
Read more 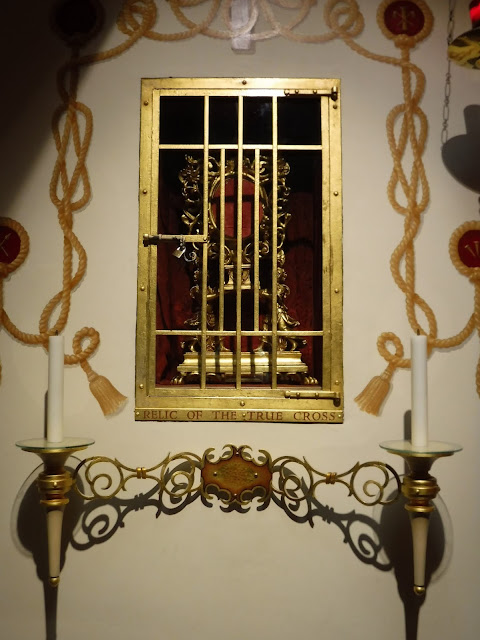 Holy Cross ? I happened across a Relic of the True Cross as I sauntered about the Anglican Shrine at Walsingham. Back in the day pilgrims may have combined a pilgrimage to the Walsingham with a visit to the Bromholm Priory - one of the buildings that Cromwell knocked about a bit. As you can see from the pics I took on pilgrimage in 2014.


Find myself reflecting on the Dream of the Rood,  the Ruthwell Cross and the last pilgrimage I made to Ruthwell  in 2015. 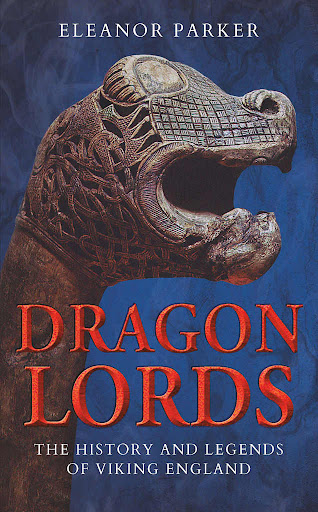 Eleanor Parker sums up the significance of burial mounds (and supposed burial mounds ) on page 91 of her "Dragon Lords - The History and Legends of Viking England" ( I.R. Tauris 2018. ISBN 978 1 78453 786 9).  In Norse literature, they are "the location of encounters with the otherworld, with supernatural beings and with the dead. For Anglo-Saxons, they were seen "as meeting places and as landmarks, as the home of dragons and demons and the site of hidden treasure."
"Dragon Lords" and Austin Mason and Tom Williamson's  Ritual Landscape in Pagan and Early Christian England  have been in the background of my thinking as I creep towards Walsingham, developing layers of interpretation for the  Walsingham Way website.  Making a pilgrim journey at a snails' pace gives time to see what has been under ones nose for ever. Among the things that have caught my eye on the way from Burgh Castle to Norwich, the Norfolk Saints Way and then on to Walsingham, …
Post a comment
Read more

Pandemics as a Disrupter 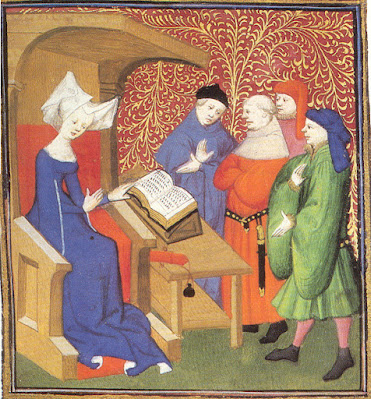 Christine de Pizan. British Library . Harley 4431, f.259v. The writing is on the wall! Thanks to the Graffito writer of Acle. His words  record the Plague that ran rampant through the population of Norfolk in the 14th Century - The Black Death.  To get its meaning your Latin would need to be better than mine . Helpfully, Simon Knott provides a translation on his Norfolk Churches website:
Oh lamentable death, how many dost thou cast into the pit!
Anon the infants fade away, and of the aged death makes an end.
Now these, now those, thou ravagest, O death on every side;
Those that wear horns or veils, fate spareth not.
Therefore, while in the world the brute beast plague rages hour by hour,
With prayer and with remembrance deplore death's deadliness. The fashionable and literate lady in the illustration wears a horned veiled head dress.
The Black Death was one of those great disrupters that mark the watersheds of history. Not so much causing change,  but a catalyst accelerating changes alr…
Post a comment
Read more

I am interested in Norfolk's high places. Many of them marked by heritage churches. St. Peter's Belaugh is on my home turf .


Since working on the Walsingham Way  - plotting an off road pilgrim route from the east coast through Norwich to Walsingham, - I keep finding more.

Most recently, I have been at Swanton Morley. All Saints Church is set on a spur overlooking the river below.  Pictures of churches tend to focus on the building rather than its place in the landscape.   Maps don't always help, Ordinance Survey contours don't always do justices to a sites unique setting.

Photos seem to give the best sense of the topography.
Towards that end, I am hoping others will join me to produce a collection of churches in high places. I would be interested to know how much interest there might be in this.
Where a collection could best be gathered is a moot question.  Flickr or a Facebook group, perhaps?
I have started to gather some of my pics on my Flickr Account   I had little …
Post a comment
Read more

Another Sunday in Lockdown 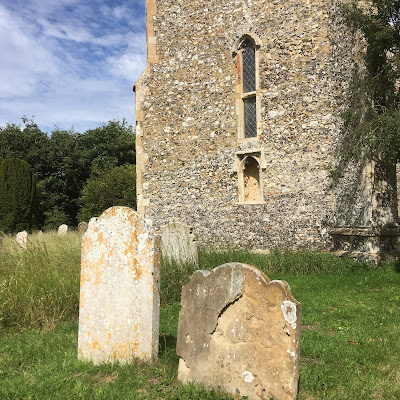 It was another Sunday in lockdown. On Sundays I go to church! Our church buildings are holy places, if only because of their use by generation after generation. Sadly, they are not yet all open after lockdown, not even for private prayer but the churchyards are open.


All Saints, Horstead was this Sunday's church of choice. Simon Knott wrote a nice piece about the church on his Norfolk Churches website. I came with a bunch of memories, memories that triggered Psalm 42 in my heart and mind. "As the deer longs for flowing streams...."  Oh! The river flows quietly beyond the churchyard and God's here sure enough. It is the later verses that come first to mind:


Wandering through grass among the graves. I remember my brothers and sisters in Christ who have gone before me.
For most of the 1980s I was Rector here.  Names and stories come to mind. They died and were buried in the Christian faith.
It is true that we are mortal, "The days of man are like grass,  when the win…
Post a comment
Read more

From a History of the County of Suffolk: Volume 2There was an old religious house on the Suffolk side of Thetford founded by Uvius, the first abbot of Bury St. Edmunds in the days of Cnut. It was said to have been founded in memory of the English and Danes who fell in a great battle near by between King Edmund and the Danish leaders Ubba and Hingwar. It was served by canons who officiated in the church of St. George as a cell of St. Edmunds.

About the year 1160, in the days of Abbot Hugh, Toleard and Andrew, the two surviving religious of this cell, depressed with poverty, visited the abbot and expressed their strong desire to withdraw. At their suggestion the abbot and convent of St. Edmunds resolved to admit to the Thetford house certain Benedictine nuns who were then living at Ling, Norfolk.

The bishop of Norwich, the archdeacon of Canterbury, and the sheriffs of Norfolk and Suffolk gave these ladies and their prioress Cecilia an excellent character, and the change was solemnly e…
Post a comment
Read more
More posts