In Search of St. Withburga

I wanted to honour a founding mother of the faith but even before I started I feared I was on a fool’s errand. The old books tell how the monks of Ely Abbey came to Dereham and stole St. Withburga’s body! So what relics could I hope to find?

She, a royal princess, is said to have founded a religious community in Dereham in 654AD. The town sign depicts her with deer - two does - whose milk, it is said, sustained her community in its early days.

One can’t imagine many deer in Dere- ham today! So instead of going straight to her holy well, I turned left in front of the church, into St. Withburga’s Lane and headed for what looked as if it might be country. On the right I found . Crossing into an open space, I followed a path downhill and turned right along a little brook. At a T-junction I went right again and approached the church from the valley.

For the first time I thought that I might catch the sight of a deer as the path passed through some Alder Carr. I was surprisingly pleased. The legend recounts that it was to a bridge crossing the stream, close by the church, that the sisters came to meet and milk the deer. I could easily imagine how it might have been. 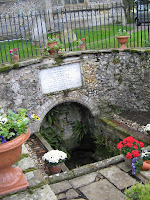 Once up the hill and into the churchyard I went straight to the holy well. Tradition says it is a healing well that sprang up when St. Withburga’s body was snatched away! Here it was! But the sceptic in me imagines the spring has always been there! To have a church and community by a source of clean water made a lot of sense in 654 AD! In any case, it was still St. Withburga’s well!

The present day church is open during daylight hours. There are good guide books and lots to see. But if, like me, you travel as a pilgrim you will want to take some time in the Lady Chapel. As I stilled myself in that beautiful space I saw all round me evidence for the continuing work of the church and remembered it had begun 1353 years ago. As I prayed I had a sense of someone, there and then gone, like a deer passing through a glade. The Saint? I wondered! Hmmnnnn…..

Popular posts from this blog

Rescued from the Sea of Chaos 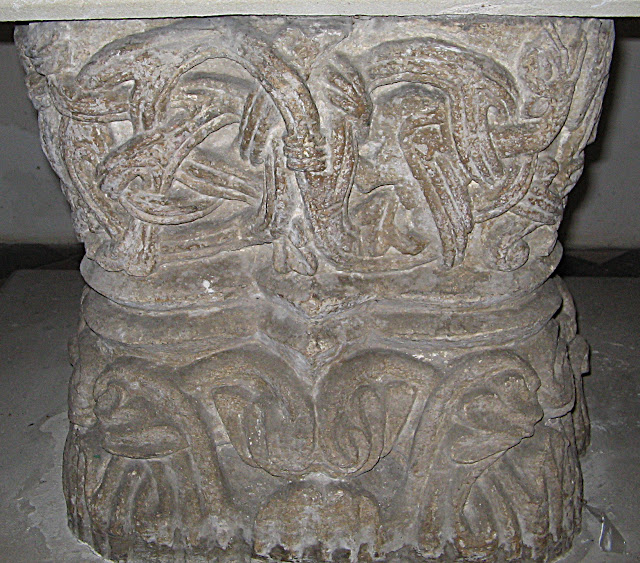 This font base was recently rescued from the church of Holy Trinity, Hautbois before the redundant church was handed over to the Guides as an extra building for their Hautbois Activities Centre . As far as I know it's providence is as follows : It had been buried and discovered in the 19th C when the nave of , the now ruined, church of St.Mary (a.k.a. St.Theobald) was being cleared. Historic England record the font in these terms: E arly C12 font base, supporting C19 square bawl. Base carved with entwined winged serpents, divided from the foliated base section by double keel moulding.  I imagine bawl is a typo. What they do not say, although this is true The square 19th Century bowl plunked on top of a wonderful 12th C font base, which still appears to have some of red pigment on the winged serpents, is hideous! To my mind the lower layer of the font base is not so much foliat as waves of the sea, but perhaps I am reading too much into it. In any case, the meaning
Read more 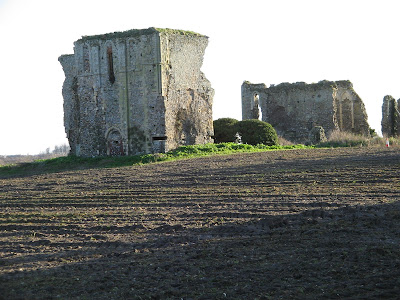 I parked on the promenade at Walcott and headed towards Mundesley. Gulls wheeled overhead while others stood at the tide line. Near the shoreline Sandeling ran about like clockwork toys on the sand and Turnstones, well, turned stones! In the bitter wind I thought of Mary. Her name in Hebrew Miryam is derived (some say) from the words Mar Yam, Bitter Sea. Bitter wind! Bitter sea! It seemed about right for a Lenten walk! At the end of a line of bungalows a flight of steps led off the beach. If you come this way you can’t mistake it! There’s a red dog poo bin at the top! From there I followed the rutted track and crossed the main road. Ahead of me was the archway and ruined gatehouse of what had been Bromholme Priory – my destination! The wonder-working Holy Rood of Bromholme, to which pilgrims flocked, was said to be a piece of the True Cross. Found by St. Helena in Jerusalem, it had been brought to England after Constantinople fell to the Muslim armies. After the dissolution of
Read more 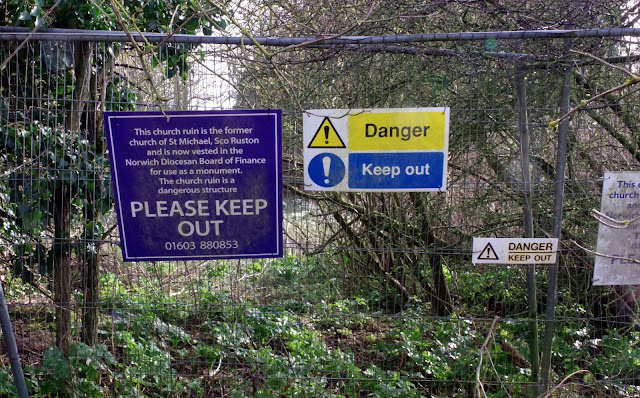 From Lockdown to Locked Out Today's destination church was St. Michael's Sco Ruston of what's left of it.  Ruined in the 1980's  An ivy clad dangerous ruin.  Thoughts turn to the future of the Cof E in the country. Is this the future for many rural churches?  The answer to the question is clearly yes, unless someone takes responsibility for preserving these buildings that are the treasure chests of  their community. But need that be a problem for the future ministry of our national church? My answer is a definite, No! Give or take a bit of local difficulty with invading Mercians and Vikings the Church in East Anglia used central places for their mission. Often adopting the existing central places. See -  Ritual Landscape in Pagan and Early Christian England    . It was only in the 11th century that there was an explosion of church building and a division of once large parishes. Centering the Church's Mission on central places should work well in the post-pandemic
Read more